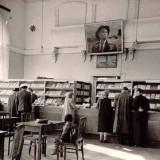 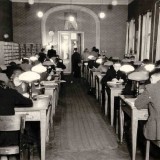 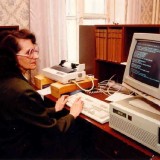 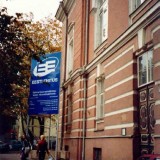 1907 – the Tallinn Free of Cost Public Library and Reading Room opened its doors to the public on Oct. 14, at Nunne 2 Street. From the very beginning the citizens actively started to use the library. By the end of the first year, a mere two and a half months,  there were 2041 books in the stock, 10 067 borrowings and 8 659 library visits. In a Reading Room for up to 60 persons 20-40 titles of journals and 20-25 titles of newspapers were available.

1920 – the Library was removed to Gogoli Avenue 4 (now Estonia Avenue 8). This presentable historicistic building was built in 1894-1895 for the Tallinn Russian Social Community. The first design was made by academic M. T. Preobrazhenski (his project was also Aleksander Nevski Cathedral on Toompea), the final drawings of the house were designed by the architect R. O. Von Knüpffer.

1922 – Nõmme Library was established as a library of Nõmme city community „Ühendus“. In 2002 the library celebrated its 80th anniversary. In the same year the library moved into a new modern space in the building of Nõmme Elementary School.

1923 – the library started with home lending

1933 – the Youth Library was established in the building of Tallinn Central Library. Later it bacame Estonian Children`s Literature Centre.

1938 – Central Library Archive was opened. The function of the Archive Library was to collect and preserve all the materials in Estonian and about Estonia. According to new conceptions, the collection that had grown to more than 40 000 items, was distributed among various institutions in 1951, most of it came into possession of the National Library of Estonia.

1944 – the role of acting as a central library of Estonia was taken over by the State Public Library of the Estonian SSR. In the post-war period the structure of the library was established, more branches were opened and the number of employees increased.

1947 – the Department of Subject Bibliography was opened.

1947 – Pirita branch library opened its doors to the citizens. The branch was located at Merivälja Street, in a building that was dismantled to make way for the 1980 Olympic Games projects. The next location was Merivälja Street 24. The extension of Pirita Gymnasium of Economics houses the library since autumn 2003.

1948 – Pääsküla branch library was established. In the last 20 years Pääsküla library has moved three times. In 1980s the library was located at Pärnu Avenue 444 and was called Kivimäe library. Then the library moved into the basement floor of apartement building at Tungla street, and after that into the extension of an apartement building at Rännaku Avenue. Since Sept. 28, 2005 we serve the reading public in a building specially designed and built for a library after the regained independence in 1991.

1960 – Torupilli library was founded in the facilities specially built for the library. In 2002 the library was reopened after major repair works  and replanning of public areas.

1974 – centralization of all Tallinn city libraries.

1982 – Paepealse library was formed on the basis of Lasnamäe Cildren`s Library, established in 1982.

1984 – Sääse library (initially Mustamäe 3rd Library) was founded in the facilities specially built for the library.

2000 -In summer 2000 library’s main building reconstruction started. The Department of Literature in Estonian temporarily moved into the ohter wing of the premises at Liivalaia 40 where they served their readers nearly a year.

2001 – in summer the reconstruction work at the main building was finished. The works were executed by AS Eesti Ehitus. In renovation the original architecture, interior design and color scheme was respected to the greatest extent possible.

2002 – at the end of January library re-opened for service in the newly renovated building at Estonia Avenue 8. Children and Music Department for the first time started as separate departments. The library switched over to computer-based services. Department of Literature in Foreign Languages and Department of Acquisitions continue to work at Liivalaia 40.

2007 – Nurmenuku library was established. The collections mostly originate from Salme library, closed in 2006 due to lack of space and the opening of a new library branch in Kalamaja. The collections of Salme library in its turn originated from the library of J. Tombi Cultural Palace founded in 1940 and handed over to Tallinn Central Library in 1991.

2012 – On Jan 31 our readers got access to ELLU – an e-book lending and reading environment for books protected under copyright law.

2013 – from June 7th the Departments of Literature in Estonian and in Foreign Languages started eReader lending service. Before that it was possible to use the eReaders in the library only.